Palencia has the highest concentration of Romanesque churches in the world. We visit with you the most special ones in a series of posts dedicated to the best routes

The Romanesque in Palencia is one of the big surprises for the tourists that visit this wonderful land of Spain, which has the largest concentration of Romanesque churches in the world. That is an important fact, not only for the quantity: its state of conservation and the natural beauty of the surroundings make the routes of Romanesque an unforgettable experience for lovers of Art and History.

We propose to the readers of the blog of Finca El Cercado to review the most spectacular churches, according to the book Las mejores rutas por el Románico de Palencia (The Best Routes through the Romanesque of Palencia), written by Carlos M. Martin Jiménez. We will start from the villages of Aguilar de Campoo, Becerril del Carpio and Santa María de Mave. 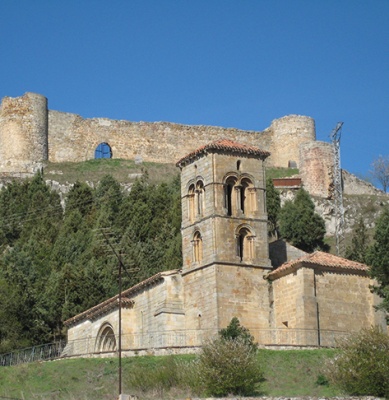 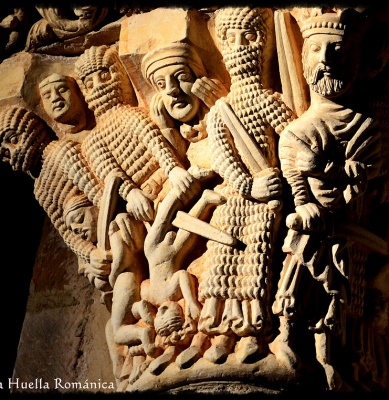 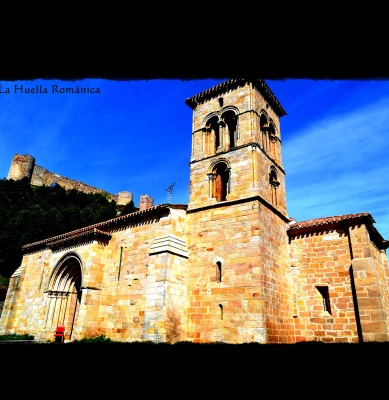 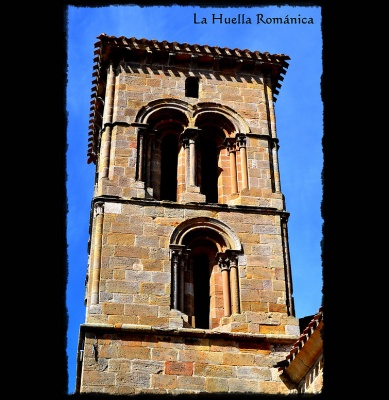 Aguilar de Campo is one of the largest towns in the province of Palencia. Its hegemony in their district, the Mountains of Palencia, goes back to the Middle Ages, when it reached enormous political and religious influence, which was evident in the Romanesque architectural style, with the establishment of a school of stonemasons who left his style forever in churches in the area. Aguilar, today is the capital of the Romanesque North.

Very near of the Castle of Aguilar de Campoo, on a hill, we find the church of Santa Cecilia, which the author of our book of routes, Carlos M. Martin, calls “a beautiful and harmonious sample of the regional Romanesque architecture”. Built on the ruins of an earlier church, Santa Cecilia was built in the late twelfth or early Thirteenth century.

With three naves and rectangular central apse, in Santa Cecilia highlights his tower, square and three sections. On each side you can admire its four semicircular portholes, richly decorated with flashing and archivolts.

The quality of their capitals also make Santa Cecilia a highly recommended visit: one of them, known as ‘the Massacre of the Innocents’, represents Herod ordering decapitation of the innocent to a group of soldiers. They also highlight other scenes, such as a bear attacking a warrior, battle scenes and fabulous animals. 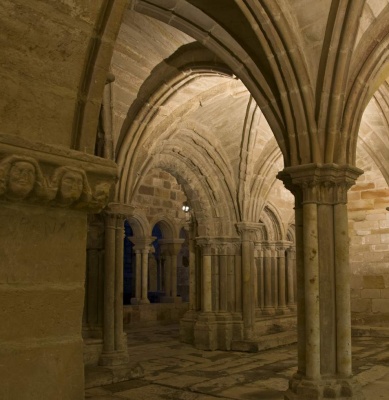 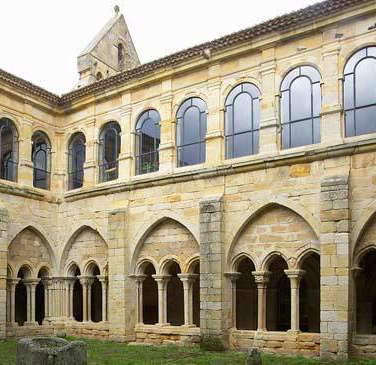 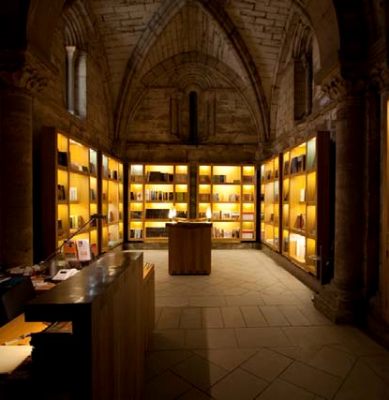 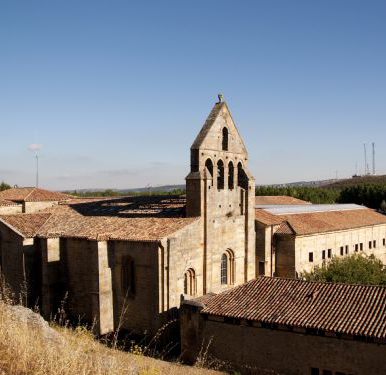 Within the area of Aguilar de Campoo, we can visit also one of the most important monuments of Romanesque North: the Monastery of Santa María La Real.

This important abbey of the Premonstratensian Order was built between the last third of the Twelfth century and early Thirteenth. Its architecture is influenced by the Cistercian style, with elements of an incipient Gothic. Around its beautiful cloister they preserved a large church, chapels, sacristy, chapter house, kitchen, refectory and a monastic stay, related with another great Romanesque monastery: San Andrés de Arroyo, located very near of Aguilar de Campoo.

The Monastery of Santa María La Real retains a large number of capitals that are well worth a few minutes of observation by the visitor: taps and fantastic animals, scenes from the Bible, as the flight into Egypt, or the resurrection of Lazarus …

In addition, the visitor finds a surprise: a Romanesque Art museum, called ROM, where it is possible to learn more about the Middle Ages architecture.

There has also established the headquarters of the Foundation Santa María la Real Patrimonio Histórico, an entity that oversees heritage conservation. 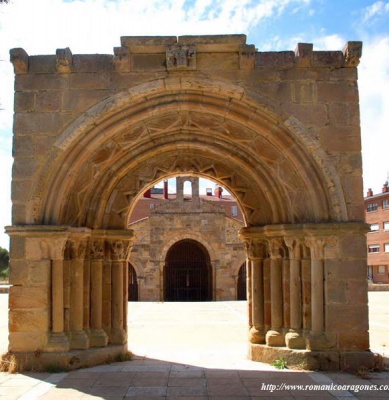 We continue in Aguilar de Campo to visit the ruin of the church of San Andrés, a missing Twelfth century monastery that was located in the surroundings of the castle. The remains of the old chapel was moved in the early Twentieth century to its current location in the city center. We can enjoy a recomposition of its head, with semicircular central apse and side chapels and a free cover decorated with a set of archivolts and molding zigzag today.

We finish our tour of Aguilar in the church of San Miguel, the parish church of the town, which preserves Romanesque reminiscences. It is very interesting to visit its museum, which beautiful houses are examples of Romanesque imagery, as the Christ of Santa Cecilia, from the Twelfth century, or the Christ of the Agony, Thirteenth, and various sculptures of the Virgin with the Child. 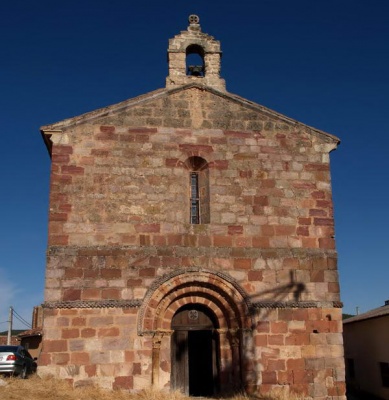 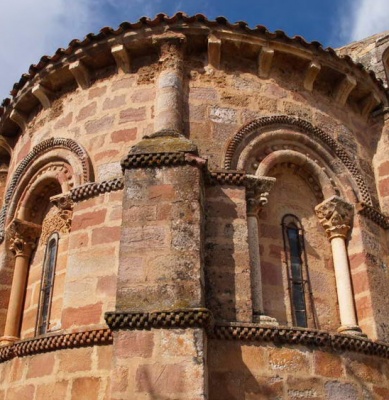 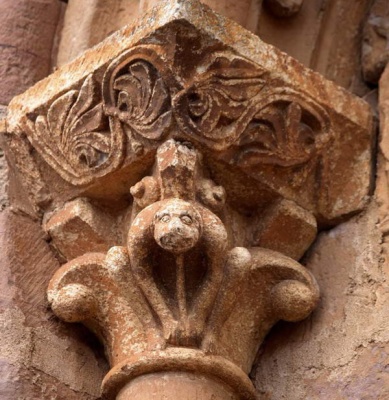 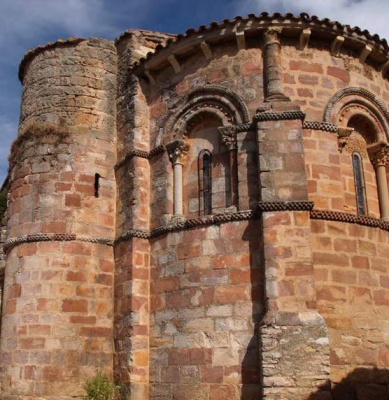 Our route continues in Becerril del Carpio, a small village formed by three quarters. We stop in La Puebla de San Vicente to see the temple of the same name, from the Twelfth century. With a single nave and a semicircular apse, in this church highlights the decorations of the apse windows and the capitals, with scrolls and a curious monkey crouch. 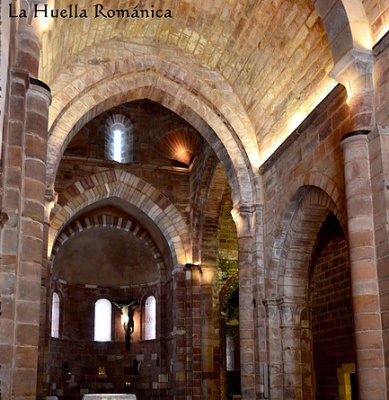 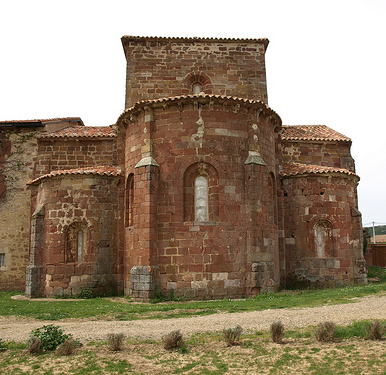 We conclude our route today in Santa María de Mave, which hosted an important Benedictine monastery preserved the church, whose construction date is not clear. With three naves, large cruise, straight presbytery and three semicircular apses, Santa María de Mave is one of the stops on the route of Romanesque North for reasons such its elegant door or its austerity, influenced by the Cistercian style.

The opinion of our expert: Cristina Párbole 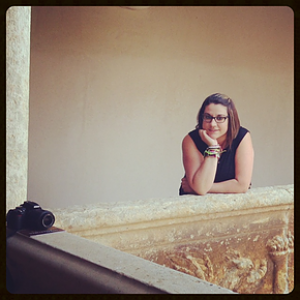 In this route that we propose from the “Finca El Cercado” we discover two of the most important monasteries in the north of Palencia.

Knowing these monasteries is key to understand the Romanesque style. Aguilar, head of the old district, has become the Romanesque town par excellence, good examples of this are the churches mentioned in the route. The quality of the capital of the Massacre of the Innocents of the chapel of Santa Cecilia has made is considered one of the jewels of the national Romanesque. In this capital, the typical Romanesque austerity leads to a visualization of the emotions, visible, in this case, on the faces of mothers, torn helplessly watch their children killed by Herod’s soldiers.

A must stop is Becerril del Carpio, where three churches (San Vicente, San Pedro and Santa Maria) are the only evidence remaining of the three neighborhoods that made up the term.