The mysterious story of the birth of Catherine of Austria, daughter of Queen Joanna “The Mad” and Philip “The Handsome”

December 24th, 1506. The village of Torquemada, in the kingdom of Castile (Spain) is celebrating Christmas Eve humbly when suddenly a distant chant surprises them. Across the river, a funeral procession start to cross the bridge, carrying some torches to illuminate the path. Hundreds of people walk slowly, headed by friars and soldiers. A pregnant woman walks beside them.

With stupor, someone shouts: “She is the Queen Joanna! Joanna The Mad!”

This enigmatic appearance in the town of Torquemada sounds like a legend… But it’s as mysterious as true. The daughter of the Catholic Monarchs, queen of Castile, Aragon and Navarra, arrived to Torquemada with the funeral procession of her husband, Philip “the Handsome”, with whom she was madly in love. Despite her advanced pregnancy, the queen traveled by foot, at night, from Burgos, determined to carry the body of the deceased Archduke of Austria to Granada… a destination that never arrived. 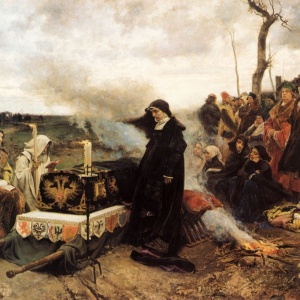 That Christmas Eve, the queen decided to stop in Torquemada to rest… And finally extended his stay for four months. Joanna I of Castile chose this little town to give birth to their sixth child.

Catherine was born on January 14th of 1507… 509 years ago. The posthumous daughter of Philip “the Handsome” would become one of the most important queens of Portugal, decisive for the Portuguese history.

The stay of Joanna “The Mad” in Torquemada is full of mystery and controversy. Today historians believe that Joanna was not as crazy as his father, Ferdinand the Catholic, and his son, Emperor Charles, wanted people to believe, in order to remove her from the throne.

“Joanna wanted to put a physical distance between her and her father, away from Burgos, where her beloved husband had died”, explains in Diario Palentino journal Annemarie Jordan, one of the greatest experts in Catherine of Austria. “So she chose Torquemada to give birth to her daughter, whom he considered the last link to her beloved Philip”.

The queen ordered that the body of her husband remained in the church of Santa Eulalia, escorted by soldiers day and night. As chroniclers told, she forbade the access to temple of any women, and ordered the celebration of Masses every day, with the same pomp that if he had just died.

Queen Joanna and his large Royal Party stayed in this village until April, when the plague forced them to move on. A stay that decimated the resources of Torquemada, whose residents were forced to give shelter and food to hundreds of people.

Joanna “The Mad” and the body of her husband never arrived to Granada. Ferdinand the Catholic and the Emperor Charles managed to captivate her in Tordesillas for the rest of her life.

Princess Catherine grew up in captivity beside her mother. She lived an austere, quiet life, far away in the court without any contact. “Despite their isolation, Joanna gave to her daughter a royal education, who became Catherine a politically successful queen”, says historian Annemarie Jordan. “If Joanna had been really mad, Catherine would not have had such a stable personality.”

In 1525, Catherine married John III of Portugal, ensuring political stability in the Iberian Peninsula. Catherine was much more than a Queen Consort: she was a woman of State, who was active in the political decisions that drove the country, helping the King with their advice.

Catherine had to live a hard life which saw the death of their nine children. When her husband died in 1557, three months after the death of the last Prince, Queen Catherine assumed the Regency of Portugal to ensure political stability until his grandson Sebastian could occupy the throne in 1562. 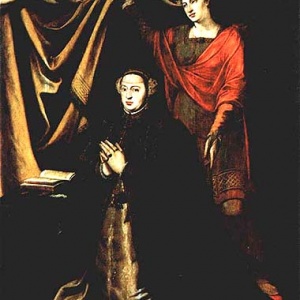 Catherine died in Lisbon on 12th February of 1578. Today, historians have rescued her figure from oblivion.

Would you like to travel the route of Joanna “The Mad” with us? Or maybe you want to visit the place in Tordesillas where the Queen and the Princess were captivated for years? In El Cercado we design a unique tourist experience for you, so that you can learn about this episode of the History of Castile, while enjoying an unforgettable stay in our spanish villa. Contact us!

Torquemada’s Bridge, crossed by Joanna “The Mad” with the funeral procession, was in 1506 a new infrastructure. Master Diego Gómez de Sisniega and his son García Sisniega built it in 1586.

·The origins of this monument seems to be roman, but changes in the course of Pisuerga river forced to expand the bridge over the centuries.

During the French invasion, the bridge lived and epic scene: people from Torquemada fought bravely against Napoleon’s troops, trying to stop their advance.

Torquemada’s Bridge has 25 spans and it is one of the largest that can be admired in Castile and Leon.

Santa Eulalia Church, where the body of Philip “The Handsome” stayed during the four months that Queen Joanna lived in Torquemada, had started its construction in the fourteenth century, being completed in the sixteenth century.

The temple was burned by Napoleonic troops during the French invasion.

In the sixteenth century, Torquemada had several districts of wine cellars. Currently, and kept more than 500.

In the sixteenth century, Torquemada had several districts of wine cellars (‘bodegas’). This kind of subterranean constructions is very typical in the south of Palencia, in the region of “El Cerrato”. Torquemada’s wine cellars have just obtained the ‘BIC’ declaration because of their cultural interest.

Today more than 500 ‘bodegas’ are kept in a good state of preservation.

Every summer, Torquemada remember the arrival of the funeral procession of Joanna I of Castile, “The Mad”, and Philip “The Handsome”. In the month of July, the town organize a theatrical representation of that historic episode and the four months that Joanna and her daughter Catherine stayed in Torquemada.