close
If Palencia is a place of pilgrimage for lovers of Romanesque, the Roman Villa of La Olmeda is a must for those who love Roman art. A unique corner where you can immerse yourself in their habits of life, their art and their legacy. Located in the Palencia municipality of Pedrosa de la Vega, just one hour from our Finca, it is a must to dive into the art and way of life of 2000 years ago.

For many, the best Roman mosaics in Spain are in the Roman Villa of La Olmeda. A historical set that we strongly recommend to all our visitors. In the tour you can see 1500 m2 of mosaics, excellently preserved, in an environment that has been recovering with various archaeological works since its discovery on July 5, 1968, on land owned by Javier Cortés. It was he who started the excavation work, before transferring it to the public administration, which promoted the recovery work that we can enjoy today.

Roman Villa of La Olmeda, declared an Asset of Cultural Interest, has won international recognition thanks to several awards or mentions such as the one made by the National Geographic magazine, which considered it one of the 12 greatest discoveries of modern archeology. But beyond labels, this is a space to make an immersion in the past.

It is estimated that its construction dates from the end of the first century of the II after Christ, although it is in the IV when, by a possible change of use, the new building that is now preserved is erected. A Villa with a great life, since it remained active until the 6th century. In the visit you can walk through the main building, dedicated to housing, and now largely recovered, including the magnificent arcade of the peristyle. 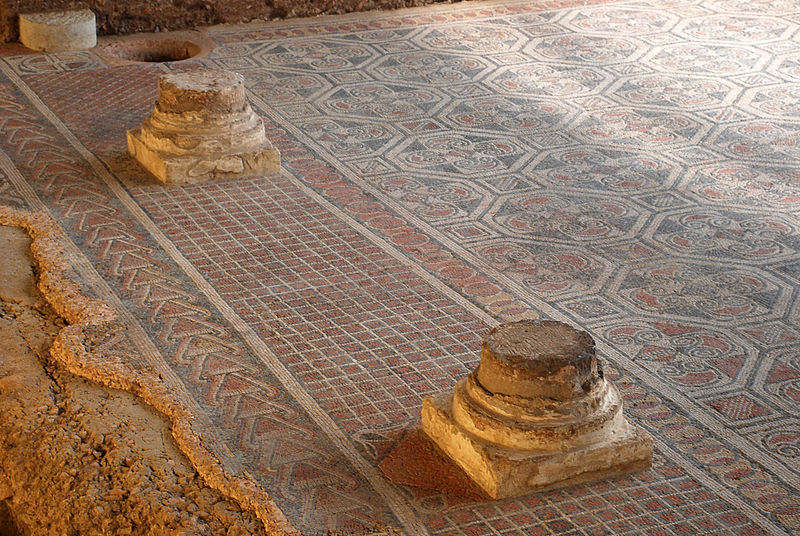 Although if this Villa Romana stands out for something is the mosaics that are distributed by the pavement of the almost 3.000m2 of construction. Perhaps the most impressive in our eyes is the one located in the oecus, of 175m2 and a superb execution. It consists of three parts. In one, several hunting scenes appear. On the other hand, it reflects the mythological scene of the discovery of Achilles by Ulysses, recurrent in Roman times or the Renaissance. There is still another area, with oval medallions with portraits very possibly from the owner’s family.

Next to this main construction, which was joined by a corridor, you can also contemplate the bathrooms, which also have several mosaics. They are 900m2 with a typical design of the time, with its frigidarium, tepidarium and caldarium. The archaeological site, which can be visited from Tuesday to Sunday, from 10.30 am to 6.30 pm, is completed by various necropolises, corresponding to different periods, which extend into the Middle Ages.

An interesting alternative to spend the day among Roman ruins and return to Finca El Cercado to enjoy a special dinner in our cozy house or a tapas menu with the exquisite local products we have in our area.