In this post, we will take a look at the Holy Week and Easter celebration in two capitals of Castile and Leon: Palencia and Valladolid. These cities are located near of our Spanish Villa (Finca El Cercado), offer visitors an unforgettable experience of meditation, religion, art and fascinating traditions.

The Holy Week or Semana Santa is an important religious celebration in Spanish culture since Middle Age, gaining relevance during the Baroque Period. The brotherhoods orneighborhoods, dressed with habits and hoods (capirotes), performing penance processions and remembering the Passion of Jesus Christ.

These celebrations have many differences between Spanish regions: in Andalusia, Holy Week is a glamorous celebration, but in Castile and Leon is more solemn. In the processions, every brotherhood carries wonderful religious statues, floats with sculptures that represents different scenes from the Passion of Christ or the Sorrows of Virgin Mary. Many of these floats are baroque art pieces of significant historic and cultural value. Brotherhoods have owned and preserved these statues for centuries in some cases. Usually, the religious statues are accompanied by Marching bands, devoted to the images and brotherhoods.

Valladolid is one of the most famous Spanish capitals in Holy Week (Semana Santa), and is considered Feast of International Tourist Interest of Spain since 1981.

The Good Friday processions are considered an exquisite and rich display of Castilian religious sculpture. On this day, in the morning, members of the brotherhoods on horseback make a poetic proclamation throughout the city. The “Sermon of the Seven Words” is spoken in Plaza Mayor Square. In the afternoon, thousands of people take part in the Passion Procession, comprising 31 religious statues, most of which date from the 16th and 17th centuries, by artists like Juan de Juni or Gregorio Fernández. The last statue in the procession is the Virgen de las Angustias, and her return to the church is one of the most emotional moments of the celebrations, with the Salve Popular sung in her honour. 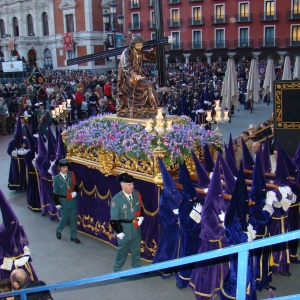 Easter is one of the most spectacular and emotional fiestas in Valladolid. Religious devotion, art, colour and music combine in acts to commemorate the death of Jesus Christ: the processions. Members of the different Easter brotherhoods, dressed in their characteristic robes, parade through the streets carrying religious statues with the sound of drums and music.

In the National Sculpture Museum (museoescultura.mcu.es), in Valladolid, it is posible to admire 104 religious statues to the processions, such as fact museum unique in Spain.

The Holy Week or Semana Santa in Palencia has a significant cultural and artistic value, because of the root of their processions and brotherhoods, some of them were old centuries. It is known for its elegance, sobriety and solemnity. Since the nineteenth century, Holy Week in Palencia has a particularity that makes it unique: all the brotherhoods parade in all the processions. It has been Declared of the Feast of International Tourist Interest of Spain in 2012.

In the processions it is possible to see 35 religious statues that highlight for their quality and beauty, some of them made by renowned artists such as Alejo de Vahía or Victor de los Rios.

The most representative symbol of the Holy Week in Palencia is the “Tararú”, a long trumpet marking the rhythm of the procession, inspired in the wind instruments of the Ancient Rome that announced the sentences. His special sound is associated with the Passion of Jesus Christ in that city of Castile and Leon. In fact, the penitents are called “tararús”. 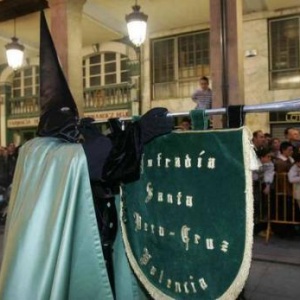 Another singular tradition of the Holy Week in Palencia is the Brothers Call or “Llamada de Hermanos”: with beating on the doors and touches of “tararú”, the brotherhood call the brothers to take part in the processions.

On Holy Monday, it takes place one of the most curious processions of Five Wounds or “Las Cinco Llagas” , in which is possible to see the crucifixion of Jesus Christ, by Alejo de Vahía (XIV century). After the procession, the brotherhoods celebrated the “Acto de Vestición”: the ceremony of get dressed with habits and hoods.

On Tuesday, visitors can live one of the most traditional processions: “El Prendimiento”, in which the brothers remember the arrest of Jesus in the Garden of Olives.

The processions of The Light and Darkness (Luz y Tinieblas) and The Fifth Agony (Quinta Angustia), celebrated in complete silence in Wednesday night, are inspiring and thrilling.

On Maundy Thursday, highlights the procession of The Agony in the Garden (Oración del Huerto), in which is possible to see the wonderful religious statues. The spectacular parade of Silent Penitential (Silencio y Penitencia) takes place in the early hours of Good Friday. 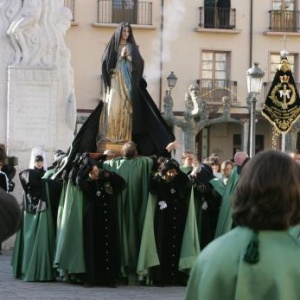 Finally, the procession of the Breaking of Veil (Rompimiento del Velo) ends the Holy Week and brings joy back to the city of Palencia because of the Resurrection of Jesus Christ or Easter Sunday.